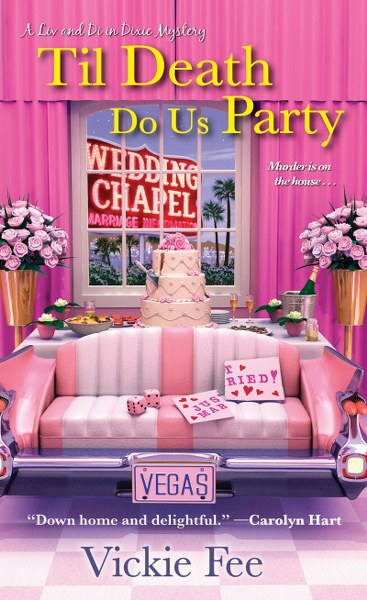 Til Death Do Us Party
A Liv and Di in Dixie Mystery #4
by Vickie Fee
Genre: Cozy Mystery

Las Vegas knows how to party, and for once, event planner Liv McKay won’t
be entirely behind the scenes. The Dixie gang is in Sin City to
celebrate Mama and Earl’s rockin’ Elvis-themed wedding. And
between juggling the botched bachelorette party and a problem-plagued
soirée back home, Liv’s ready to double down on some fun.
Mama & Earl’s happily-ever-after seems like a sure thing, but all
bets (and nuptials) are off when they get to the Burning Love Wedding
Chapel. Their Elvis-impersonating minister has left the building . .
. permanently. And even worse, Liv’s cousin, Little Junior, is
suspected of his murder.
With Mama’s happy ending on the table and Little Junior about to lose it
all, the stakes are higher than ever. Liv and her best friend, Di,
must hit the Strip to find the real killer before he finally plays his ace…
“High energy, dead bodies and exposed lies. . . . A must read.”
—RT Book Reviews, 4 Stars, on Death Crashes the Party
“A wonderful cozy mystery.”
—Suspense Magazine on It’s Your Party, Die If You Want To
“Readers
should welcome this look at a very Southern lifestyle, complete with
appended party plans.”
—Kirkus Reviews on One Fete in the Grave

Being a fan of cozy mysteries, I was thrilled to be receive this for its book tour! ‘Til Death Do Us Party, seriously catchy title that made me smile throughout and let me tell you, there was plenty of reasons to laugh and smile reading this!
Our book characters, Miss Betty and Daddy Wayne, accompany Earl and Mama in addition to Liv (our mystery solver), Larry Joe, Di, and David to make Mama’s wedding a real family event in Las Vegas! All the characters are well written in this solidly developed story line.
Liv’s cousin, Little Junior, is such a sweet character, lives in Vegas as an Elvis tribute artist who drives a taxi to supplement his income, and offers to drive the wedding party all around town. So, when he gets arrested for murder, there was no question that Liv and Di had to clear his name and find the real killer.
It took a while to get to the mystery but I enjoyed every minute and I kept jumping around trying to figure out “who done it” because there are actual several viable suspects. Fun but puzzling plot and definitely worth the read!
Add to Goodreads
Amazon * Apple * B&N * Google * Kobo 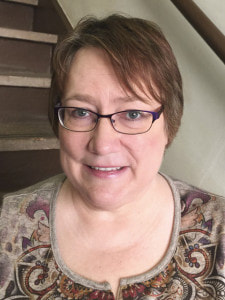 Vickie Fee is a past president of the Malice in Memphis chapter of
Sisters in Crime and current member of the Wisconsin Sisters in
Crime. She has a degree in journalism and spent many years as a
newspaper reporter, covering small Southern towns populated with
colorful characters, much like those in the fictional town of Dixie.
She now lives in Michigan’s Upper Peninsula with her husband, John.
She grew up in the South on a steady diet of Nancy Drew and iced tea,
and when she’s not writing, Vickie enjoys reading mysteries and
watching B movies from the 1930s and ‘40s.
Website * Facebook * Twitter * Pinterest * Amazon * Goodreads