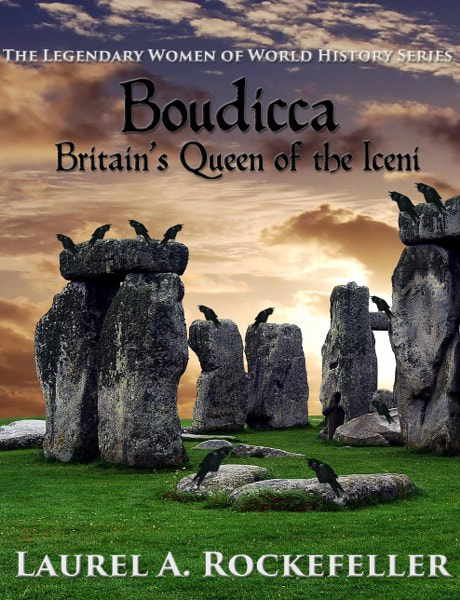 Boudicca: Britain’s Queen of the Iceni
The Legendary Women of World History Book 1
by Laurel A. Rockefeller
52 pages

Why is The Morrígan’s raven crying? Only Britons with hearts for true
liberty know!
In 43 CE Roman conquest of Britannia seems all but certain — until a
chance meeting between King Prasutagus of the Iceni and a runaway
slave of royal decent from the Aedui tribe in Gaul changes the fate
of the British islands forever.
Rise up for liberty with the true story of Boudicca: Britain’s Queen of
the Iceni and discover one of the most inspiring stories in history!
A Legendary Women of World History creative non-fiction biography.
Add to Goodreads
Amazon * Apple * B&N * Kobo * Smashwords

Excerpt:  This book is based on events in the life of Boudicca, Queen of the Iceni and constructed using primary and secondary historical sources, commentary, and research. It is told through the lens of a mother and daughter of the Dobunni tribe in the 5th century of Common Era in what became the Anglo-Saxon kingdom of Mercia in south central and south western England.
I have always been fascinated with history, namely the history in Europe, and am truly ecstatic that I am a part of this Women in History Book Tour in which I received the whole series by author Laurel A. Rockefeller.
Boudicca, of the royal line of the Aedui near the Seine, was enslaved by a Roman mistress who beat her until she had had enough and crossed the strait to Dover into Britannia for a better life. She chanced upon Prasutagus, king of the Iceni, who immediately took a liking to her prior to his meeting with the Romans to form a bargain and two months later they were married.
Fast forward nine years to when they twin daughters were eight and the fruits of Boudicca’s distrust towards the Romans came to fruition when the Governor, Gaius, brought to light his dislike and disgust of the British.
Two years later when the twin daughters, Alys and Morgan, were ten, the Romans made their strike killing King Prasutagus then destroying not only their village, but their “innocence” as well in front of Queen Boudicca. The Queen of the Iceni was left to rot and die while her daughters were taken prisoner enraging Boudicca. Keeping her focus, she rose armies which freed her daughters and slaughtered the Romans until the final trap against her was set. Rather than allow the Romans to enslave them or worse, she chose an alternative path.
For that, you must read more about this Queen who fought against the Roman onslaught of what is now England. 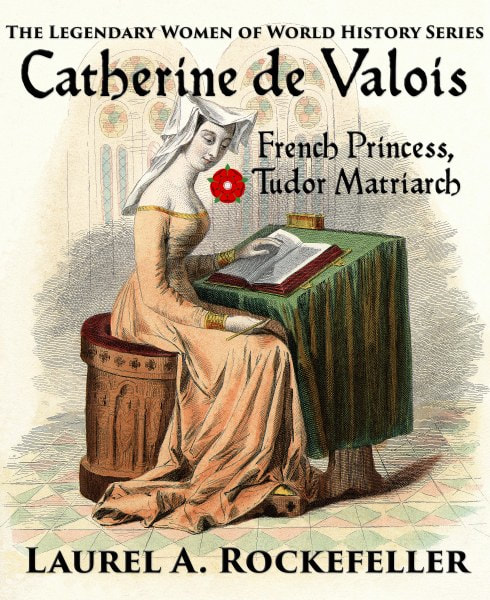 War made her queen of England. Her love for a Welshman made her
immortal.
Best known as Henry V’s Agincourt bride from Shakespeare’s “Henry V,”
Catherine de Valois was an extraordinary woman of faith, courage, and
conviction in an age of politically powerful women.
A younger daughter to King Charles VI of France terrorized by his
mental illness, Princess Catherine survived the ravages of his
schizophrenia, a civil war at home, and King Henry’s war with France
to become one of Renaissance England’s most fascinating and
courageous queens.
A Legendary Women of World History narrative biography.
Includes a War of the Roses family tree, detailed timeline, and detailed
suggested reading list/bibliography.
Add to Goodreads
Amazon * Apple * B&N * Kobo * Smashwords

I admit, England’s royal history has always fascinated me along with the House of Valois (France) and the Wars of the Roses Family Tree in-between England’s Houses of Lancastrians, Yorkists, and Tudors.
This Legendary Women of World History Book 2 follows the French Princess, and Tudor Matriarch, Catherine de Valois as she sets to marry King Henry V of England, birth Hendry VI of England, be widowed, finally finding true love in Owen Tudor, and finally birthing Edmund Tudor who in turn married Margaret Beaufort (the great-granddaughter of the Duke of Lancaster who was also the grandfather of Henry V).
Say that five times fast!
Most of the reading follows King Henry V’s blood war upon France whose king, Charles VI, was mentally unstable and ill. Even upon vowing to Catherine there would be no blood shed as long as the heir-apparent, Charles VII, would not take the crown, making Henry V king of France upon Charles VI death. Fortunately, for Catherine, Henry V’s refusal to honor peace treaties and his own vow ultimately led to his own death on August 31, 1422. This was just a tad over two years after their marriage on June 2, 1420.
I would not want to be a part of any of these families honestly. The timeline towards the back, I absolutely loved, as it showed such a tragic timeline rich in history.

Born, raised, and educated in Lincoln, Nebraska USA Laurel A. Rockefeller
is author of over twenty books published and self-published since
August, 2012 and in languages ranging from Welsh to Spanish to
Chinese and everything in between. A dedicated scholar and
biographical historian, Ms. Rockefeller is passionate about education
and improving history literacy worldwide.
With her lyrical writing style, Laurel’s books are as beautiful to read as
they are informative.
In her spare time, Laurel enjoys spending time with her cockatiels,
attending living history activities, travelling to historic places in
both the United States and United Kingdom, and watching classic
motion pictures and classic television series.
Website * Facebook * Twitter * Pinterest * YouTube * Amazon * Goodreads