I rescued a 10-month old Cain-Terrier mix, Mitzie, around a month ago to keep my other Terrier mix, Eva, company.  Plus, with three kids, the more fur babies the merrier around here.  Mitzie had been adopted out a few times prior but, had always be returned because “She just has a lot of energy”.  Yes, that is exactly what the notes I read said about her.  She had never seen a yard and had lived her entire life in a kennel.  In my opinion:  Of course she has a lot of energy, she has been cooped up all day!

I digress.  Yes, she has a lot of energy which is easy to work with but, one thing that I had to redirect was her chewing.  While she leaves furniture alone she can destroy in a matter of minutes every single fluffy toy in a house plus, add two dog beds to the list.  She is spunky I give her that!

These chew toys by Lifewit are A-M-A-Z-I-N-G and have saved me some extra white hairs!  Lifewit named themselves correctly because I was at my wits end with her chewing life.

Both my dogs took to them immediately from their bouncing to squeaking they were wagging their tails wanting to play fetch.

There are two chew toys both of which squeak.  A solid colored red ball with raised bones and a clear colored blue bone with raised dots along it. 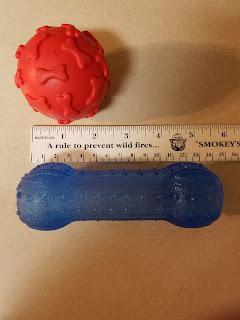 Why the raised points on these?  Well, they are four-fold:

(1) Easier for them to grip it with either their paws or mouths.

(2) Easier for you to hold onto the saliva covered slimy toys to pick back up and throw again.

(3) Dental.  Yes, the raised parts help break up plaque while they chew away.

(4) Puppies chew because their gums and everything “itch” so, they chew to help relieve it and this helps brush and “scratch” that itch they want gone.

Eva is 16 pounds she does have a tiny head therefore, a tiny mouth.  The red ball fits perfectly with Mitzi who, while lighter, is taller and comes close to medium range.  However, Eva loves playing with the red ball more and Mitzie loves the blue bone.

My kids and the dogs have been having a blast with these and I am absolutely thrilled with the fact that Mitzie has NOT chewed a single other toy up since she started chewing on these!

Besides the obvious reasons why these are awesome as I stated above there are a few notes for safety reasons:  These are safe for your dogs!  Yes, the rubber is made from non-toxic dyes and from non-toxic durable rubber.

Disclosure:  I received these dog chew toys by Lifewit discounted from Langforth however; this in no way influenced my review but, I chose to write this review and was under no obligation to do so. I only write honest reviews regardless of whether I purchased a product at full price, at a discount, or received it free.  This post may contain affiliate links and, if clicked, I may receive compensation.

Is your dog an aggressive chewer?  If so, what is the #1 item they destroyed?