Chuzzle Balls! Even the name of these makes me go EEEEEEEK from how cute and perfect these are!  I have been on a bit of a collection spree with various solar LEDs and from the DIY mason jar ones to glass flower LEDs these have set themselves a bit of a step above them.  Not saying the others are not great but, these have many attributes that I have been looking for in both indoor and outdoor solar LEDs.

Even though these are listed as “Christmas Lights” on Amazon these can be used year ‘round from summer to spring; these bring light and smiles.

Can either be energized solely by solar or can be sub-powered with which was not provided.  The battery compartment is under a gasket sealed cover that takes four screws to remove.  You can use rechargeable batteries to further your green footprint. 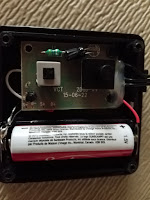 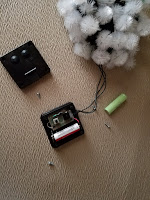 The battery compartment / solar panel has on/off buttons on the back; pressing the on switches through the different modes of lighting.   The coloring of the chuzzle balls are yellow, purple, green, and red; modes go through flashing to strobe to dimming to solid.  There is a total of 50 LEDs on a lengthy line from first chuzzle to the solar panel which can also be attached to a separate stake and placed in the ground or attached to something else.

Me, personally, I wanted to spruce up my bedroom and wrapped this around the top of my headboard (metal frame).  Easily wrapped around the length of my headboard and only had three tiny “feather” looking plastic pieces come off during the wrapping and running of it; not bad in my opinion. 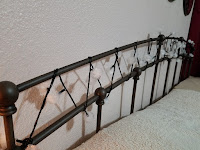 I place the solar panel on my window frame throughout the very sunny days here in southern California and have yet to have any issues of the power turning off while in use through the evening.  My kids and I have been having little camp outs in the evenings curled up in my bed watching a bit of TV after our long school and work day but, right before bed.  Just a FYI that the total length IS 23’ the length of bare wiring from solar panel to the first chuzzle LED is approximately 7’.  This gives anyone a lot to work and play with when it comes to positioning and running the solar LED to where it gets the best sunlight. 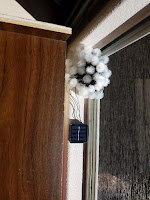 Disclosure: I received these Chuzzle Ball LEDs by LUCK LED for free from the store front Holigoo Direct however; this in no way influenced my review. I chose to write this review and was under no obligation to do so. I only write honest reviews regardless of whether I purchased a product at full price, at a discount, or received it free.