My kids have had a blast building the different sets by this company that I have received and review.  Great combinations and yes, when it states 2-in-1 or 3-in-1 that means that the two or three listed boxes come with that set or series; not individually nor separate.  Every set so far has been completely compatible with LEGO and there have been no pieces that have been loose unless otherwise noted.  Enjoy them as we have!

First off do not let your kid finagle you into helping them make this at 6AM on Saturday before you have your first cup of coffee.

Book 1:  Submarine:  Makes one battle submarine and one search and rescue type submarine

My youngest so really wanted the submarines and away we went into building them.  These pieces all fit together perfectly with zero pieces that were warped, loose, or incompatible in any way.  All the other pieces I kept in a quart sized ziploc bag with the three direction books. 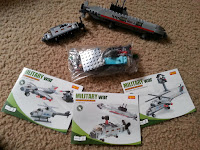 I admit that the first part of the book for the submarines I had to re-do a few times because I had mistaken the 3-length angled pieces in front with 4-pieces so, yeah, the lack of coffee really made for a bump in the road at the beginning for me.  Very pleased with the kit all-in-all though especially with there being so many variations that can be made from it. 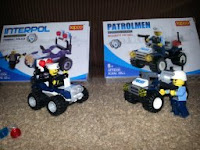 This is a 2-in-1 that comes with the Interpol Set and the Policeman Set; each has a single ATV, Policeman, and handheld guns for them.  Easy to put together; the directions are simple to follow and we have found that they are also easier to follow than other comparable directions.  Took my sons around 5 minutes to build them.   Very good construction.  I have found that the Xipoo sets are compatible with LEGO.  My sons are very excited for these.  Not sure how long it will be until they are lost in the voids that are their LEGO bins.

This is a 3-in-1 Building Block Set that is a part of the Xipoo Defender Series.  Each one came with a directions on one page.  Took around 2 minutes to build each one and all of them had a few extra pieces.  They are around 1″ in size but, have moving “missile” launcher parts which we all found fun to play with.  Good little kits.

This is a 2-in-1 Army Fighter set that comes with the Super Fast Fighter Jet and the Mission Helicopter.  Everything has a lot of attention to detail which makes this set even better than what you see.  Took around 15 minutes for my eldest son to put together each of them and both sets had a few extra building pieces in them.  This is a very fun set.

Having a daughter who loves to build and has a very active imagination is something I absolutely love.  This is a 3-in-1 and comes with a lot of fun and imagination:  Beach Buggy Set, Jet Party Set, and Moving Day Set.  The pieces went together without any issues and are compatible with LEGO.  It took her around 10 minutes to build all three.  There is several accessories with each one that truly makes this a top-notch building set.  My daughter is ecstatic with these.

Are you a fan of building blocks?  I am a huge one!